What is Multiple Sclerosis? 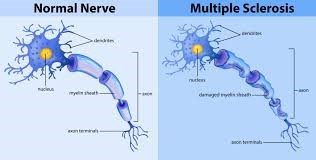 Multiple Sclerosis (known as MS for short) is a condition affecting the central nervous system. In a person who does not have this illness, there is a substance in the body called myelin which protects the nervous system and helps the messages to travel from the brain, along the spinal cord and to get to where they need to go. 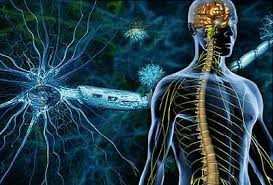 In people who have MS, their immune system, which is there to attack foreign bodies such as viruses and bacteria coming into the body, also sees myelin as a threat. It starts to attack it, and strips it of the fibres, which then leaves scars, as well as sometime damaging the nerves themselves.

Because the fibres are then damaged, this can cause problems getting messages through the nerves – they may become slower, or they may not be able to get through at all where the scarring is worse.

Although there is currently no cure for this illness, there are ongoing research projects and things like paid clinical trials where scientists are trying to find better drugs for treating the illness and ultimately being able to cure it.

The first symptoms of the disease can vary from person to person, as it depends which nerves are being damaged the most. Some of the symptoms include problems with vision, feelings of tingling or complete numbness in some parts of the body, dizziness, tiredness and problems with memory. Someone with these symptoms would be referred to a neurologist who would be able to diagnose the illness.