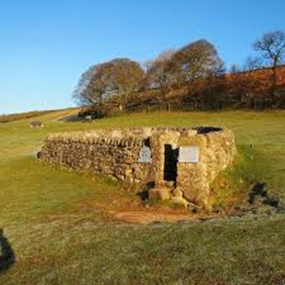 For those who like to get out and explore, the Peak District in Derbyshire is a dream come true. Armed with walking maps, there is plenty to see and do as you roam the beautiful countryside taking in waterfalls, stunning scenery and of course the odd pub lunch here and there!

As well as the countryside, Derbyshire is home to the village of Bakewell – famous for the ever popular Bakewell tart, the stunning Chatsworth house, home to 16 generations of the Cavendish family and the seat of the Earl of Devonshire, and a village which has one of the saddest and most intriguing histories in the world…

The village of Eyam on first glance looks like a pretty Derbyshire village. Nestled in amongst the Peak District, this tiny village has a history, which now more than ever tells us a tale of loss, sacrifice and doing the right thing for others.

In August 1665, a tailor from the village ordered some cloth from London. It was delivered from the city, but within a week the tailor had contracted the deadly bubonic plague, which was rife in London at the time. It wasn’t long before other villagers started to fall ill – and the local vicar was to make a decision that would mean the village went down in history as the plague village.

When he noticed how quickly the disease was spreading, the vicar ordered that the village went into quarantine – nobody came in and nobody went out – to stop the spread of the disease to other towns and villages.

During the fourteen months that the village was like this, the villagers endured a terrible ordeal. It is estimated that around 75 percent of the villagers lost their lives to the bubonic plague, and one woman lost her husband, as well as six of her 7 children.

But, the result of the hardship endured by the villagers meant that the local towns and villages remained plague free.