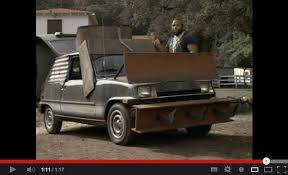 In the 1980’s there were a series of ridiculous television shows that took the suspension of disbelief required to hitherto unknown levels. Manimal, a show where a man could change into a Hawk, Black Panther or Snake by simply breathing for example or  Automan, a superhero somehow generated by a computer error and Battlestar Galactica, a Star Wars cash in that featured the same sequence of a Cylon Fighter being blown up the same way every week. 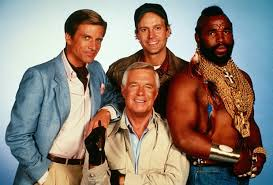 This was not the worst of it. This surely fell to the A-Team. This was a bunch of escaped criminals from a maximum security military prison who then chose to roam around the USA “helping” people. If you have a problem and no one else could help (and if you can find them) then you call the A-Team. Despite the fact they were technically fugitives the police never had their descriptions.

They were able to get themselves out of any situation as long as they had guns (never used, the contract for the show stated it)a garage and a welding torch. They seemed to be able to make anything out of whatever was lying around wherever they were in the world. For example some used pallet racking Ireland, Bolivia or in  Senegal became a tank or something equally devastating. A nonsense.